We created a sitemap:

We used indirect observation utilizing the existing website analytic data to identify areas that could be improved. We then started creating sketches and wireframes of the new proposed design:

We tested and iterated the design resulting in a final visual design system to support the new Masterpass.com: 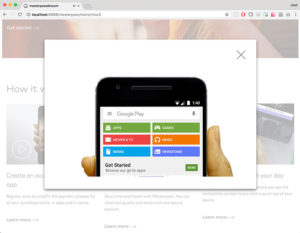 We iterated the prototype based on the feedback from the usability testing and then I handed the high-fidelity prototype code over to the development team to build the new Masterpass.com.