The Mastercard marketing team initiated a project to build a web menu system that could be used across all of Mastercard’s marketing websites. The marketing team engaged my user experience team to design, prototype, and test the new menu design.

The menu system currently used on the Mastercard.us website could not accommodate the updated content strategy and had a poor information architecture, along with a bad user experience: 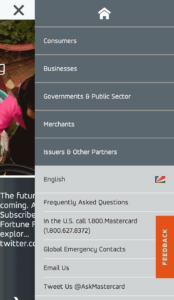 We created a responsive visual design for the menu system using the branding guidelines provided by our branding team: